Hello, my name is Mark D. English (aka Arjuna D. Ghose), and I am an activist and a spiritual monk of 28 years.

I am protesting the current quality of mental health services and the lack of understanding of consciousness (as well as their propagation that they do) on the part of psychiatrists.

Consciousness is the expertise of spiritual Masters—not scientists or psychiatrists.

“Science does not deal with planes of consciousness; it deals only with the facts that it gets from the physical world. Consciousness is something which science is not approaching and cannot approach.” — Sri Chinmoy, Spiritual Master

Some of my beliefs:

“While posing as ‘authorities’ on the mind and mental health, psychiatry has no scientific basis for any of its treatments or methods.” — Citizens Commission on Human Rights

More of my beliefs:

Some of my goals:

In addition to being an activist, I am also a (Sri Chinmoy disciple) monk. I’ve experienced my own personalized version of Sri Chinmoy Yoga.

You can read about how I got started with my causes in a blog article I wrote here. This blog article talks about:

Blog posts such as this will soon be part of my multi-volume memoir, The Struggle Within

You can help by:

“Psychiatry makes unproven claims that depression, bipolar illness, anxiety, alcoholism and a host of other disorders are in fact primarily biologic and probably genetic in origin…This kind of faith in science and progress is staggering, not to mention naïve and perhaps delusional.” — Dr. David Kaiser, psychiatrist

As far as I’m concerned, psychiatry as a viable diagnoser and effective helper of mental health is one of the biggest specious arguments on the planet. 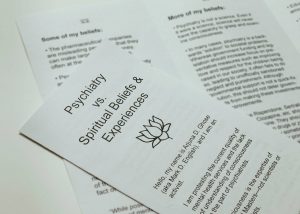 “One of the biggest misconceptions about the psychiatric drugs is that they are these medical remedies that only act in a particular way on this presumed disease, or abnormality, or chemical imbalance that we have. That idea is a commercial idea.”


“I am appalled by the rapid diagnosis & medicalization of human distress. The consequences of dumbing down human experience to a quick label & prescription have created indelible harm.”


“As far as I’m concerned, psychiatry as a viable diagnoser and effective helper of mental health is one of the biggest specious arguments on the planet.”


“There has been no shortage of alleged biochemical explanations for psychiatric conditions... not one has been proven. Quite the contrary. In every instance where such an imbalance was thought to have been found, it was later proven false.”


“You can't disagree with a psychiatrist without getting a diagnosis.”


“It is spirituality that has the inner wisdom to solve all our problems, and it alone can kindle our true consciousness.”


“There is an astounding lack of accountability in mental health treatment. Ask your mental health clinician how they are monitoring treatment outcomes. How successful are they in helping? Most have no idea.”


“I once heard renowned traumatologist, John Briere, quip that if Cptsd were ever given its due, the DSM [The Diagnostic and Statistical Manual of Mental Disorders] used by all mental health professionals would shrink from its dictionary like size to the size of a thin pamphlet.”